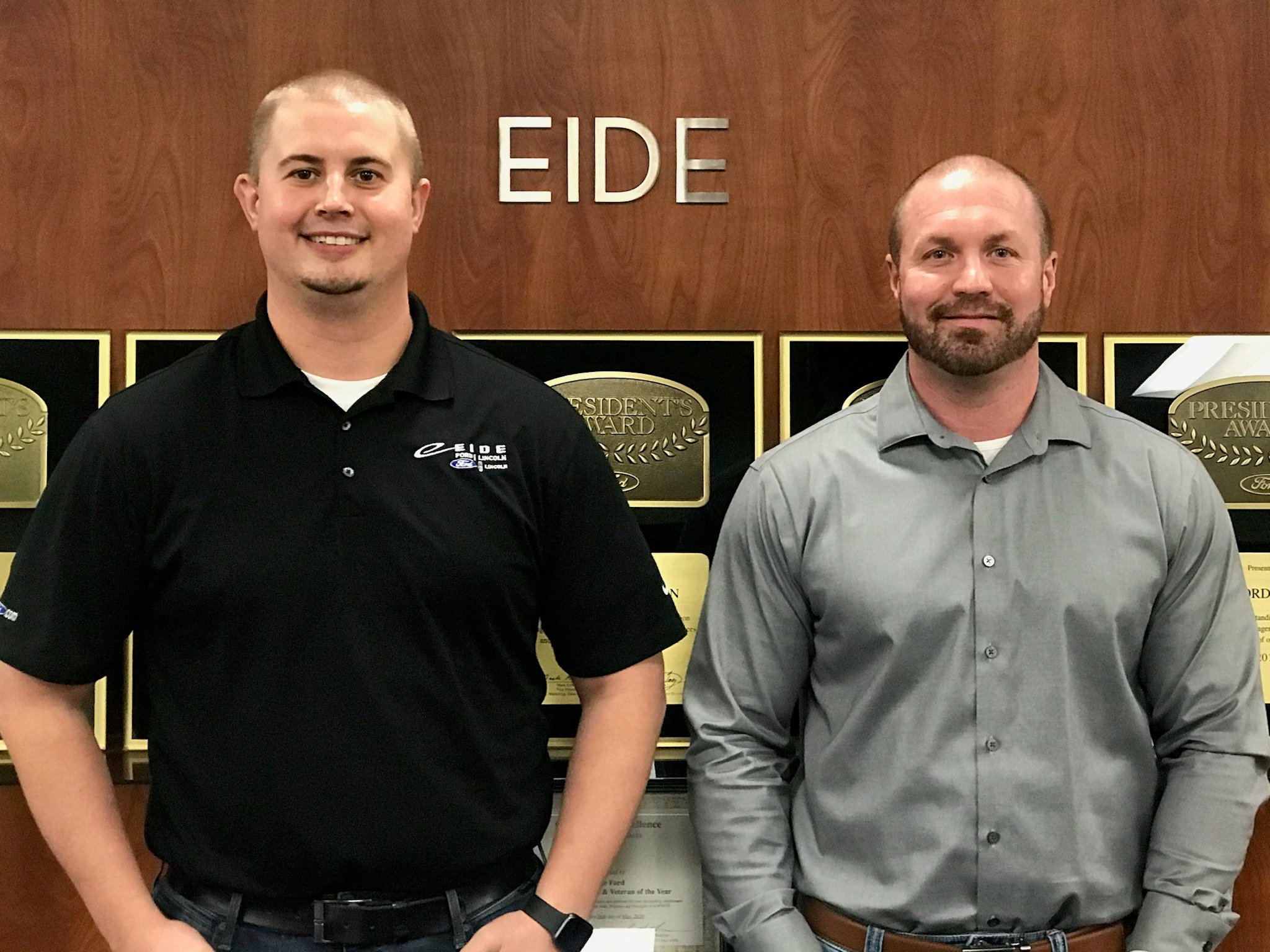 We’re excited for growth within the Eide Ford leadership team. Two of our own have excelled during their time with Eide, and we’re happy to announce these promotions.

This last year proved a lot. We were able to retain our full-time employees and even offer these promotions to two of our own.

“At the end of the day you understand that continuing to maintain employment and achieving year-over-year success says a lot about the business and culture here at Eide,” Schuchard said. “The hard-working, fun culture and the Bismarck community are what keeps things going. It was pretty amazing to see what we were able to accomplish.”

It seems like just yesterday we were welcoming Jesse Schuchard to our team as General Sales Manager from our Chrysler store. Now, we’re happy to announce he’s been promoted to the Ford store’s General Manager!

Schuchard has been with the Eide team since 2012 and actually made his start with our Ford store, so it’s only fitting he grows within our team here.

“When I left the Ford store in 2016 to go to the Chrysler store, we brought the Eide culture to a new location in town. The Eide culture has created friendships with new folks that are still there today from the previous ownership.”

"I'm very happy to have Jesse in the leadership position he is in. This is the result of years of planning and development, and he is very deserving of the position," Peterson said.

In his new role, Schuchard is focused on all aspects of the dealership, rather than more of a sales-focus.

“Working hard and taking care of the customers is a big deal and a big part of our culture,” said Schuchard. “I don't think a lot of places have that. There's something about this place that is special.”

Passing the torch to Corey Rennich was an easy transition, according to Schuchard.

“The big thing with Corey is that he fit in perfectly from day one. His hard-working mentality is a great add. He definitely deserves the spot. He's very talented.”

Jesse went on to say that coming in from another dealership and receiving a promotion doesn't happen very often. That shows how talented Corey is.

Corey Rennich has been with our team since 2018, but he has had longtime dealership experience. Stepping into Schuchard’s role as General Sales Manager, was a natural fit for this former used car manager. His passion for the auto industry makes him a true asset to our team.

Rennich began his career in the auto industry nearly 20 years ago and having the ability to grow within the company since joining the Eide team means everything to him.

“This is something I've worked for the last 20 years of my life,” Rennich said. “I started out washing cars at a dealership 20 years ago. I have nothing but the best to say about the owners of this place. They’ve recognized me as family.”

"Corey has done a tremendous job for the Eide organization over the years, and is also very deserving of his promotion," Peterson said.

What really stands out to Rennich is the opportunities from within the company. Corey originally joined our team based on his experience and the name he had made for himself.

“When there’s a management position available, they look within the organization to who has earned or deserves the role,” said Rennich. “If no one is standing out, they’ll look outside the organization, which is how I got here.”

He went on to say, “I appreciate the owners and Jesse Schuchard for having confidence in me for taking on this role. It means the world to me. I've only been here 2.5 years and I think I've proven to them what I'm capable of doing. It's nice to be recognized.”

Corey says he also wanted to recognize the pride in customer satisfaction that the Eide leadership team has.

At Eide, we believe in the opportunity to grow within a business. We value hard-working people and those who truly care about our customers. Jesse and Corey fit the bill on both accounts.

Jesse Peterson said, "We're very excited about the team we have going into 2021 and beyond."