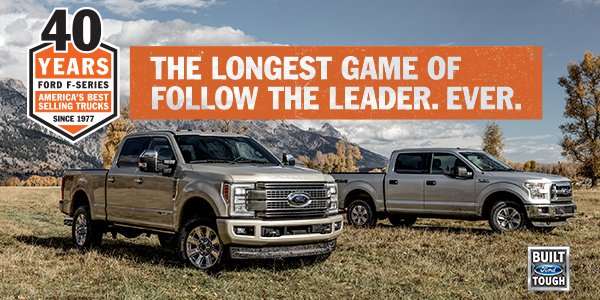 On top of leading the field of trucks, the Ford F-Series has also been the U.S.'s best-selling vehicle for 35 years. Over 26,000,000 trucks have been sold since 1977 to hard-working men and women like you.

By constantly pushing to build the toughest trucks on the market with the latest innovation, features, and best-in-class performance standards, Ford has claimed and defended its place at the top of the industry.

The Ford F-150 and Ford Super Duty trucks aren't just the favorite option nation-wide. They're the number one pick here is Bismarck.

According to Urban Science, the Ford F-Series trucks were the best selling pickups in Bismarck/Mandan in 2016. That means when you pick out a new Ford truck at Eide Ford Lincoln, you're choosing the pickup favored by the country and your neighbors here in the grand state of North Dakota.

Ford Trucks: A History of Excellence

But our favorite advancement? Easy.

Just in 2015, Ford made America's toughest trucks tougher than ever before with the all-new high-strength, military-grade aluminum-alloy body for the light-duty F-150. Now, Ford took that revolutionary concept and applied it to the brand new 2017 F-Series Super Duty - making it likely we'll see the Ford F-Series continue to dominate this year. And the next.

And probably for eight more after that.