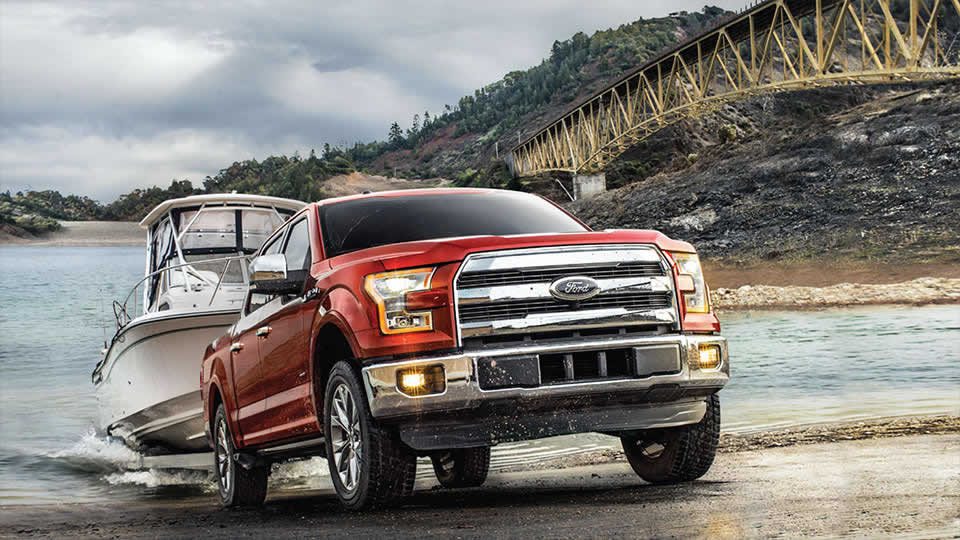 Get to Know the New Ford F-150 in Bismarck: Towing and Payload

If you've heard anything about the new 2016 Ford F-150 truck in Bismarck, you've probably heard about its military-grade aluminum body, which makes it up to 700 lbs. lighter than the previous body style.

However, there's much more than metal that gives this new F-150 an edge over the competition – continuing its 39-year run as the best-selling truck in America.

Did you know that the new 2016 Ford F-150 has best-in-class towing capacity? This new model gives you towing capability that no other half ton truck – including the Silverado or the Ram – can match. In fact, the F-150 can pull more than 12,000 lbs. with a 3.5L EcoBoost V6.

That's more than six tons, so go ahead and get the bigger boat. Shop F-150 now in Bismarck. »

While we're talking about moving things around here in North Dakota, you might also like to know that the new F-150 has the best payload in its class. In fact, this military-grade aluminum monster can carry up to 3,270 lbs. on its back.

And it's not all braun, the new F-150 also helps you secure your cargo with the new BoxLink™ system. It helps you work smarter and get more work done.

Towing capacity and payload are just the beginning. Ford engineered this new F-150 to be the future of work, and it's packed with more features to help you do more work:

Eide Ford Lincoln has the area's largest selection of new Ford F-150s, and they're all tagged with Eide Markdown Pricing up-front and in writing.

Find your new F-150 online, and stop in for a test drive here on the Bismarck Expressway.