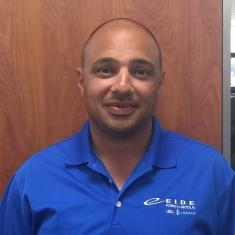 Stephen Polidano hadn't heard of Bismarck for most of his life. To be fair, we're not sure how many North Dakotans could point to the island nation Malta on a map.

But lucky for us, Steve found his way across the Atlantic to join the Eide Ford team. This summer, his upbeat attitude and tenacious pursuit of the best deal for customers made him our top salesman for the month of June.

From Malta to North Dakota

Steve joined the Eide Ford Lincoln team last July, after moving to the United States with his wife - a move he wasn't sure about at first.

When she first mentioned Bismarck, North Dakota, Steve said he looked it up.

"I said, 'Alright, looks like a safe place, nice place.'"

Steve still thinks it's a nice place - and he does his part to make it even nicer.

"Working here, it's great meeting people from around this area. They're really nice people, and the team is great, too," Steve says. "There's a lot of teamwork."

SALESMAN OF THE MONTH STEVE POLIDANO

What do you enjoy about auto sales?

Steve: It's the excitement. Every deal is a different challenge - every customer has different needs, and you need to find those out and address them. It's a challenge I get to work through with the customer, or like a game where we both get to win.

What's the absolute best part of your job?

Steve: Making people happy when they close on their next car or truck. Figuring out whatever they would want and being able to deliver for them.

What’s your best piece of advice for car shoppers?

Steve: You have to trust your salesman, which means going to a place you trust. We can be an awesome source of information, and make the process so smooth. But if you aren't in the right place, bad salesmen can mislead you.

What put you at the top in June?

Steve: Not leaving any stones unturned. It was making sure I had understood what they, what every customer, really needed. And then it's giving them as much direction and satisfaction as they came in expecting.

Who would you like to thank for this award?

Steve: Absolutely all the management, but really the entire team. Everybody helps you out here. It's a big team effort.

How do you spend your free time?

Lately I've gotten into fishing again, so I'm heading to the river or the lake. It's completely different than fishing in the Mediterranean so I'm still getting used to it!

What is your favorite vehicle to sell?

Steve: The F-150. That truck sells itself, and it's packed with great features.

Next time you're in need of a vehicle, come on by!

Or check out the other folks working to solve your auto problems every day at Eide Ford Lincoln: