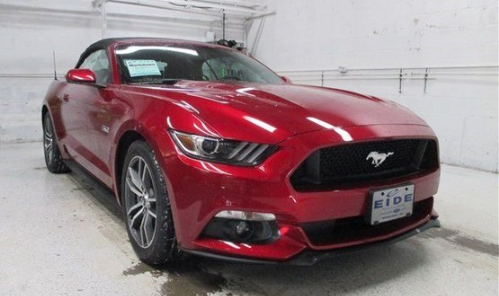 Buck Wild: Up Close With the New 2015 Ford Mustang in Bismarck

Pony Up in Bismarck

We couldn't be more excited about this car. Ever since Ford announced the all-new 2015 Mustang early last year, our team at Eide Ford has been chomping at the bit to bring this beautifully powerful pony to Western North Dakota.

Now that we've had a chance to drive a few of them around Bismarck, we thought it would be a good time to give you the inside scoop on what makes this year's Mustang so awesome. The new generation of Mustang represents the next step in a long legacy of performance and Americana. For starters, this new pony has an available 5.0L V8 that's a familiar format for all Mustang fans out there, but with more HP than the previous version. There's also a workhorse 3.7L V6 and a suprisingly potent 2.3L EcoBoost that can get you from Bismarck to Fargo on less than 7 gallons. All Performance. All the time.

Th new Mustang features four selectable drive modes that let you dial in the handling dynamics to your liking: normal, snow/wet, sport and track. Select your driving mode with an easy-to-use toggle swich on the center stack.  The 2015 Mustang will then adjust its handling and response characteristics to fit the scene. The Mustang has a history of leading sportscar innovation. This year's Mustang is no exception. With a standard push-button start, available SelectShift transmission, optional EcoBoost engine, Track Apps for electronic line-lock and launch control, 4.2-inch message screen on the dash, blind spot information system (BLIS), adaptive cruise, and SYNC with MyFord touch, the Mustang is ready for anything. The 2015 Mustang honors what Mustang has always been and always will be, while boldly moving to a new era in storied Ford legends. When you look at the 2015 Mustang, you'll notice that it echoes the vintage-style fastback design which has always been a fan favorite. It sits wider and lower than the previous model, andit features all of the signature details such as tri-bar taillamps and dual exhaust pipes. It has a lowered decklid in the rear, but still retains ample cargo area. When you look at this Pony up close here in Bismarck, it's hard not to touch. The 2015 Ford Mustang is available now in Bismarck

When you're ready to find your dream ponycar, head down to Eide Ford on the Expressway. We have a handful of great models in-stock, but we can also order in the perfect Mustang for your lifestyle.